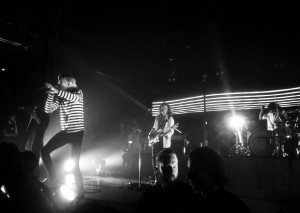 On a Thursday night at South Side Ballroom in Dallas, alternative band The Neighbourhood broke their months of silence in signature monochromatic fashion.

After getting heavy radio play with “Sweater Weather” in 2013, and releasing a free mix tape, #000000 & #FFFFFF (pronounced “Black and White”), featuring collaborations with hip-hop artists including YG, Raury, and OG Maco, they have quickly gained recognition in both the alternative and hip-hop music scenes.

The Southern California-based band, described as “urban rock,” “experimental hip-hop,” and a variety of other genres, returned to Dallas as part of their 2015 “Flood” The tour, riding on the hype of their upcoming sophomore album Wiped Out!, and brought a few of their new songs with them.

To warm up the crowd, The Neighbourhood brought along two opening acts composed of some of their closest friends, also from Southern California, Bad Suns and Hunny.

Indie band Hunny was the first to play, as the six members took the stage in an eclectic variety of bright colors and kicked into their first song, “La Belle Femme.” Lead singer and guitarist Jason Yarger swayed around the mic stand, keeping his audience engaged through every song, even though very few people, if any, knew any of the words to the songs he was singing. 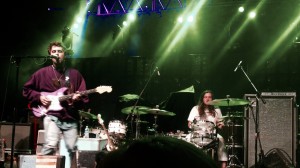 Unfortunately, the bass guitar was turned up so loud that the shimmering guitars present in Hunny’s studio recordings were nowhere to be heard. Regardless, they still put on a solid performance, ending the set with their only two officially released songs, “Natalie” and “Cry for Me,” before leaving the stage.

Bad Suns, was the next warm-up act, and as soon as the four members were in sight, the crowded surged forward, crushing anyone unfortunate enough to have claimed a front row spot.

While only formed in 2012, the band, surrounded by red and blue lights, resembled something ripped straight out of the 80’s. Frontman Christo Bowman, draped in a black cloak, danced around the mic stand to the opening song, “Rearview.” Oddly enough, after this, they immediately played their most popular song, “Cardiac Arrest,” rather than saving it for last.

The set continued at a steady pace, as Bad Suns played more fan-favorites, including “We Move Like the Ocean,” “20 Years,” and a dramatic performance of “Sleep Paralysis,” during which Bowman stood on the front railing as fans held him up. Bad Suns closed out with their final song “Salt,” and said goodnight.

After about a 20 minute break, the lights finally dimmed and the stage began to flash white, the sound of a Ferrari engine filled the room and The Neighbourhood walked out onto the stage.

They did not waste any time in getting to brand new songs. They started things off with “Prey” off of the upcoming album, an uncharacteristically sunny song for a band known for being dark, with quick guitar riffs reminiscent of The 1975 and Arctic Monkeys. This allowed lead singer Jesse Rutherford to move and dance around the stage more freely, something their more brooding and moody songs never allowed him to do. 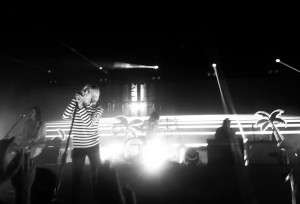 What followed was a five-song stretch of music from the debut EP I’m Sorry… and the first album I Love You., including “Let It Go” (not to be confused the Frozen song of the same name) “Wires,” and “Baby Came Home.” As the final notes of fan-favorite “Afraid” faded out, the stage dimmed and the lights began to spin as they cut right back to new music with the slow-burning, hypnotic “Daddy Issues,” and the more-undertone “The Beach.”

This quickly transitioned into “Wiped Out!,” beginning in a similar upbeat fashion to “Prey,” and maintaining the same tone until the beat switched to a slower tempo and Rutherford started quietly rapping lyrics that were difficult to understand in a live show setting.

Despite this, “Wiped Out!” quickly became the most theatrical part of the whole show, as the beat switched a second time to a faster pace, the guitars distorted, Rutherford glided around the stage with a tambourine, and the lights flashed rapidly. About halfway into this jam session, the band started leaving the stage, one-by-one, until the song was over and the stage was empty.

About five minutes later, Rutherford returned to the stage solo and performed a medley of songs from the #000000 & #FFFFFF mixtape, aided by instrumental tracks and autotune effects, until he left the stage once again. The rest of the band returned to the stage to perform the final leg of the show, including “Warm,” another song from the mixtape, a ridiculously well-executed cover of Gnarls Barkley’s classic “Crazy,” and “Sweater Weather.” Finally, before leaving the stage, the pounding drums of “R.I.P. 2 My Youth” filled the room as the crowd echoed every word of Rutherford’s melancholy lyrics.

Bad Suns and The Neighbourhood both improved their live shows over their last visits to Dallas, but the most rewarding part of the show was watching the obvious comradery between the bands. Whether it was The Neighbourhood’s drummer, Brandon Fried, standing offstage and watching Bad Suns’ entire set, or Yarger of Hunny sitting at the back of the stage and laughing along with Rutherford’s solo performance, it was clear that all of the musicians were enjoying playing the show together.

Each act of the night put on a consistently good show, so much that for the first time, I never found myself anxiously waiting for any of the openers to finish. All three bands seamlessly blended their stage presence, visuals, and music into energetic performances, making any of them must-see acts on their own, let alone all together in one night.