The Grace Prep Varsity Lions are starting their season off 3-2 with a win against Founders Classical Academy 58-0 coming out on top, and a win against Texoma 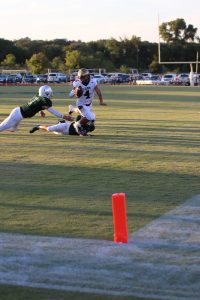 Christian 27-0, 38-21 against Legacy Prep, with The Lions coming out on top. a loss to Oakridge and last quarter loss to Waco, after leading most of the game.

Before the season, they practiced during the summer, hosted a 7-on-7 team, which is a game with teams of 7 and only do pass plays (no tackling), they placed 2nd in the State Tournament in all of TAPPS.

Quarterback Coach Brandon Helm said, “We’ve worked really hard during off season program. I think the kids have really bought into coach Reese’s system. I think we are going to coach them up really well. If we stay healthy and everybody works hard together, I think we will have a good season.”

Injuries so far include Senior Jose Rodriguez, and Ethan Childress, but overall, lions have a field-ready team.

The football team gives  the impression that they are tough and ready for any team.

“I feel like it’s [the football season] going to go good regardless, we got the athletes to do everything,” said Freshman Justin Mcnelkan, Wide Reciever.