In the recent years as Fort Worth has grown in relevancy and importance as a center of culture and arts in the DFW area, the demand for a music festival in Fort Worth has been mounting.
Finally in 2017, Fortress Festival has fulfilled that demand, bringing in top-dollar acts from the likes of hip-hop, indie-rock, electronic, and alternative country. With its eclectic lineup and ambitious location in the Cultural District of Fort Worth, the expectations were high and the anticipation was great.
Unfortunately, on its first year, Fortress Fest was faced with threatening thunderstorms and the possibility of a tornado. Thankfully neither of these hit Fort Worth, so the festival was still on, but was delayed three hours and continued as planned on its first day.
One of the glaring issues with Fortress Fest from the beginning, was the roughly half-mile separation between the two stages; one located at the Will Rogers Memorial Center and the other at The Modern Art Museum of Fort Worth. The festival was essentially split between these two sites, which resulted in bag checks at each stage, and festival goers not being able to bring purchased food and drinks when traveling from one stage to the other even with their festival pass.
Dallas local Sam Lao kicked off the festival with her high-energy fusion of hip hop and R&B on The Modern Stage. It is worth noting that the The Modern Stage was situated on top of the shallow pool located behind the Fort Worth Modern Museum. It was slightly disheartening to watch Lao play 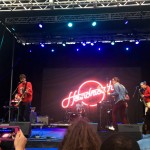 to a thoroughly dead crowd, as she played within 45 minutes of the gates opening.
Over at the main Will Rogers stage at 6:45, Houndmouth played an hour’s worth of jovial alternative country, featuring a healthy amount of guitar and saxophone solos. Needless to say, the crowd left with smiles on their faces and Houndmouth gained quite a few fans.
By 8:30, the crowd had grown exponentially in anticipation of the headlining acts Flying Lotus and Run The Jewels.
Before Flying Lotus took the stage, the stage technicians set up a translucent screen in front of his DJ table, which was used as a second screen to create unique depth affects with the two separate projectors. Flying Lotus began his set with booming bass and aggressive synthesizers, which immediately launched into modern trap hip-hop and jazz-fusion. Flying Lotus’s DJ style can be best described as a beautiful, kaleidoscopic nightmare; one minute featuring colorful chords and rapid jazz drumming, and the next featuring abrasive industrial electronic beats.
He concluded his show by casually rapping songs in his alter-ego Captain Murphy, an extremely rare occurrence. Following at 10 pm, Run The Jewels took over the stage, performing their high-energy, electronic-infused, hardcore hip-hop. As soon as the first beat 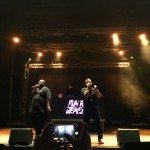 dropped, the crowd was under the spell of MCs Killer Mike and El-P, jumping and yelling the lyrics in time with the performers.
As for me, I lost my hat during the first song, which I think was because someone grabbed it and threw it as the crowd violently jumped and pushed; which generally summarizes RTJ’s fanbase.
The second and final day of Fortress Fest commenced with the performance of former Deep Ellum local, So-So Topic. Topic along with a full band took over the Will Rogers stage and played their particularly hazy style of neo-soul/hip-hop. Although being one of the smaller performances

of the weekend, Topic thoroughly impressed the crowd and was my personal favorite.
At 6:00, on the Modern Stage, indie-folk band Whitney performed a set consisting of songs from their melancholic debut album, “Light Upon the Lake.” Later, Canadian indie-pop group, Alvvays, hurriedly played through their set, which was sadly riddled with technical difficulties for the first half. By the end of Alvvays’ set, the crowd had thinned out in anticipation of headliners Purity Ring, which were scheduled to conclude the festival.

Prior to Purity Ring’s show, the technicians set up their iconic stage, featuring hundreds of choreographed stringed lights, which pulsed and flashed in time with the ethereal synth pop. The crowd was seemingly under a spell as vocalist Megan James and multi-instrumentalist Corin Roddick symphonized her soaring voice, trap drums, and arpeggiating synthesizers. With a final beat drop and a flash of lights, year one of Fortress Festival came to a conclusion.
Overall, Fortress Festival’s first year was a success, despite a couple small setbacks and organizational issues. Year two of Fortress Fest is already in the works, with promises of better organization. Pre-sale tickets are currently available on the Fortress Festival website.