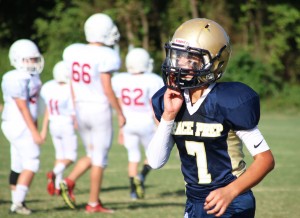 From little league to high school, most people have played sports at some point during their life. For many it’s simply a recreational activity, but for others, it’s a passion.

Jake Ratcliff is one of these people whose sport is far more than just a hobby.

Ratcliff, a seventh grader here has been playing football since the first grade. He is now the quarter back for our junior high team and plans on playing in high school, maybe even college!

But wait, Jake’s dreams do not end there, he hopes to one day play in the NFL as well.

Jake’s goals are ambitious to say the least, but surely not impossible. In fact, a former Grace Prep student, Jacob Flores is now playing in the NFL. So obviously young Ratcliff’s dreams are not as farfetched as some may believe.

Jake has already shown how dedicated he is to accomplishing his goals by putting in an immense amount of time and work into it.

“I practice 6 hours a week here and on weekends I throw the football with my dad to practice at home. I play basketball, track and other sports to keep in shape all year long. Summer is running, swimming for cardio, I play every sport. I am trying to put in the effort in every class, and I feel like I’m doing that.”

However, regardless of how dedicated you are if there isn’t a love for the game then it’s all in vain, thankfully that’s not something that Jake struggles with

“I just love the pressure of it, every play, I love getting the ball at QB and making good passes and running it,” said Ratcliff. “It’s a great game, I love it.”

Football is not only something Ratliff loves, it’s also something he feels called to do.

“I feel like God has called me to do this because I’ve always loved it ever since I picked up a ball when I was two.”

Only time will tell whether or not Jake will play football professionally, but one thing is for sure, football is a large part of his life and with hard work and determination anything is possible!

What to do & what not to do while in high school

By Kensley Walters 3 years ago