Skip to content
Varsity lions are preparing for a big play. The quarterback (Junior Jay Sedwick) hands the ball to the running back (Senior Sam Curreri or Junior Brendan Walters) but there is nowhere to go. Suddenly the Offensive line creates a hole and the running back bursts through. Nobody can catch him. He crosses over the end zone line and the crowd cheers.

The team huddles up and does it all over again.

This scene has played out numerous times this season, as the Varsity record of 6-2 shows. Varsity is heading into playoffs in about 3rd or 4th place, according to Head Coach Chris Jones. Jones is proud of the team record, because they have showed success despite three valuable seniors being out with injuries.

Coach Jones knows what it takes to form a winning team.

“Our main Strength is that we have experienced players who understand the game, so we play smart,” said Coach Jones. 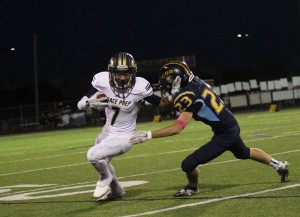 Since the Varsity team has strong running and passing games, the team shows a lot of diversity. The ability to both pass and run is unusual at the high school level and is what is making our team wise and hard-to-beat.

According to Coach Jones, this strategy “keeps defenses guessing.”

“We’re competitive and we know how to play our style of football-and our style is hard- running football,” said Varsity Junior Running Back Brendan Walters.

Skilled players at the running back, wide receiver, and quarter back positions also help further diversify how the lions are playing.

Walters knows each player on the team is important.

“I want the best for each teammate,” said Walters. “We’re all striving for success.”

There is nothing that brings these brothers closer together than duking it out on the football field and bringing home that win as a team.

However, this is a big season for individuals as well.

“This season, I personally am determined to make the quick jump from varsity player to All-State player,” said Walters. “I’m striving for the top, not mediocracy.”

Although the JV team has such a small size, Head JV Coach Chad Pegues is used to it.

“I’ve been the JV coach for 6 years, and the most kids we have ever had is around 17,” said Pegues.
Overcoming this obstacle isn’t as hard as it seems. The experienced JV coach explained what it takes to win games when they have virtually no players on the bench.

“You have to use your timeouts wisely to make sure players are well rested,” said Pegues. “The strengths of our team come from pure effort and the joy of playing the game.”

Robinson likes being a part of almost every play of the game.

“It’s great, because typically if you mess up on one play, you can correct your error in the next without having to be worried about being pulled out of the game,” said Robinson. 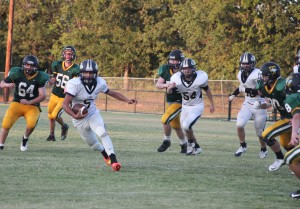 Since there aren’t many opportunities for JV practice or games, the JV Coaching staff prepares the team for varsity by using the same offensive and defensive plays.

Obstacles seem to only make the JV stronger.

“It makes us feel more like a group of brothers, because we know if one of us goes down it’s over,” said Robinson. “Overall it makes us mentally stronger than our opponents.”