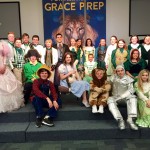 Hosting the largest play in it’s history to a nearly sold out crowd of 685 people, GPA put itself on the theatrical map.
Wizard of Oz was preceded by a live auction to raise money for fine arts and equipping our new building with science kits and lockers as well. The auction raised $10,000.
The auction and play were held at the Arlington Music Hall on Friday, April 28th. Doors opened at 6:30 for the live auction, and the play began at 7:30. The $10 tickets were all inclusive and included desert and drinks.
The dog playing Toto was supposed to be auctioned off at the event, but parents got together and bought the dog for beloved Play Director and Drama Teacher Marsha Bryan.
The play itself included an exhausting 52 individual cast members, who all travelled to Arlington Music hall every night for up to eight hours a day to rehearse and prepare.
Cast members included Emily Watson playing Dorothy, the Wizard being played by Matthew Chapman, Glenda the Good Witch played by Senior Maggie Bullington, the Tin Man, played by Senior Nate Gibbons, the Scarecrow played by Senior Will Pinon, the Cowardly Lion played by Sophomore Dawson Foster, and the Wicked Witch played by Seventh Grader Kate Toulouse.

Minor role characters were played by over 24 Elementary students, including  Kindergartener Reed Foley who brilliantly played  Toto.
“Oh I love to work with little kids!” said Senior Maggie Bullington who choreographed the entire play.
Her devotion paid off.
All this beautiful stuff you saw on stage was from Maggie’s creative head,” said Bryan.
Costumes were hand-stitched by Parent Barbara Hill, with immense attention to details in even minor roles.
Some minor actors have  three separate costumes that they wear throughout the performance.
“We couldn’t have looked so good without her, [Mrs. Barbara Hill] ,” said Bryan. 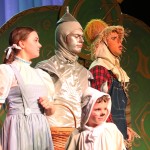