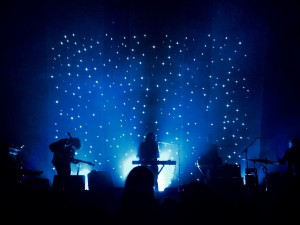 Beach House is somewhat of an anomaly. The Baltimore-based duo, comprised of vocalist/keyboardist Victoria Legrand and guitarist Alex Scally, is still virtually unknown outside their core group of fans, despite being one of the most respected indie acts currently touring and the forerunners of the atmospheric “dream pop” genre.

The band released two albums in 2015, the spacey Depression Cherry, and the more stripped down Thank Your Lucky Stars. On April 9th, the duo played their first show in Dallas since 2012, nearly filling the 4,300-capacity Bomb Factory, twice the size of the venue they played on their last visit.

Backed with minimal lighting and accompanied by a drummer and additional keyboardist, Beach House took the stage, Legrand sporting an oversized Dallas Cowboys jersey, and started with Depression Cherry cut, “Beyond Love.” The setlist, influenced by a voting feature on the band’s website, fairly equally represented both 2015 albums, as well as 2012’s Bloom and 2010’s Teen Dream. 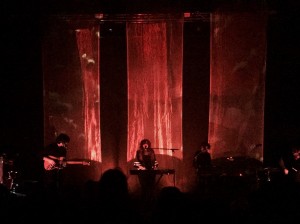 The stage, backed by three massive, translucent drapes hanging from the ceiling, shifted colors to match the mood of each song, occasionally making drastic lighting changes to accompany beat switches in the songs. As the show continued, fans cheered at any sign of what song might be played next, from favorites like “Wishes” and “PPP” to the electronic-tinged “All Your Yeahs,” the closest thing Beach House has made to a dance song.

While in their recordings, Beach House sounds somewhat quiet and reserved, nothing could be farther from the truth when it comes to their live shows. Songs like “10 Mile Stereo” and “Sparks” show the band, known for being generally reserved and calm, at their loudest and most wild, as Legrand sings to unreal levels and the stage lights flash at an almost epileptic pace.

But it was Scally’s guitar work that brought itself to the forefront on tracks like the hypnotizing “Myth” and dreamy “Silver Soul,” the latter of which was popularized after being sampled on Kendrick Lamar’s “Money Trees.” Uncharacteristic of most guitarists, Scally opted to sit down for the majority of the show, allowing him to focus more on playing his instrument, which was only marred on two occasions due to a feedback issue with the sound. 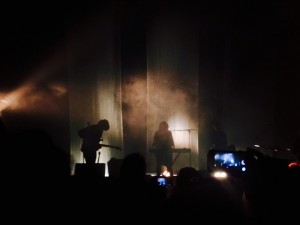 The finale, “Elegy to the Void,” completely captivated the audience as Scally’s distorted guitar and Legrand’s voice filled the room in the best performance of the night. In fact, one of Beach House’s best qualities is their ability to translate their calm and melodic recordings into grandiose live displays that make you wonder how you are fortunate enough to be in the same room as them.
Depression Cherry and Thank Your Lucky Stars are both streaming in full on YouTube.