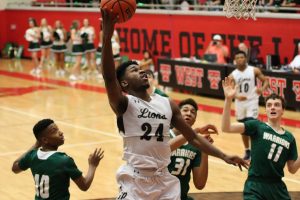 The 2017-2018 Grace Prep Boys Basketball team was one for the books. We started the season with the intent of making it to the State Finals. We made it.  All the way to the state championship game.

It was game day, and almost everyone was on their way to West, Texas.

The school day let out early, with an all-school send-off for the team.

“The students were more hyped than us,” said Senior, number 24, Jordan Phillips.

Carpool arrangements were made. A couple hundred fans packed their cars and made their way to the game, bubbling over with excitement.

The atmosphere was electric. Cheerleaders rallied the crowds. Their level of energy could have blown the roof off the gym. The student section stood throughout the entirety of the game. The crowd was wild. 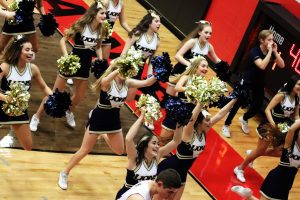 Junior Dawson Foster said that because the cheerleaders were on the opposite side of the court, some were sent closer to the stands in order to lead the fans in cheers.

Although Grace Prep held a slight lead throughout the majority of the game, we were down with less than one second left on the clock in the 4th quarter, when number 11 Myles McCrary (a junior) drew a foul and was sent to the free throw line.

He was feeling pretty confident about making his shots.

“I’ve always wanted to do something that clutch to help my team win, so I was happy and ready to make them,” said McCrary.

The scoreboard read 62-64; Woodland was ahead. All of the lion fans were watching anxiously as the referee passed him the ball.

McCrary stepped up to the line. The fans held their breath. The silence was broken by a loud cheer at the sound of the ball going through the net.

As the referee handed McCrary the ball again, Woodland’s coach called a time-out. The Grace Prep crowd grew restless at the wait. It is unconventional to call a time-out during a free throw if the shooter already has the ball.

Tensions grew. The players were a little discombobulated, but there was nothing anyone could do.

Once the players were re-situated at the free-throw line, the ref gave McCrary the ball for a third time so he could shoot his second free-throw. 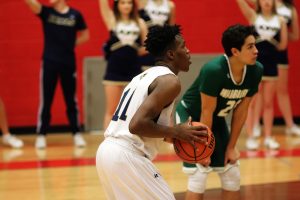 The student section was silent as McCrary prepared to shoot the second shot. The silence didn’t last long. The students, parents, and teachers erupted into a boisterous cheer.

McCrary made the shot, his confidence overcoming the pressure of the moment and sending the team into overtime.

“I looked to my left and right and the people around me were praying, cheering, smiling and jumping. With 0.6 seconds on the clock, we thought the game was over, but Myles got fouled and came through. It was amazing,” said Junior Kay Lee Sedwick.

Four minutes were put back on the clock.

After intense play, the score was tied up once again, 69-69 as the buzzer sounded.

“We were exhausted, it had been a tough game,” said Senior Yafet Alefnew.

In the end, the Grace Prep Varsity team played hard the whole game but came up short, with a final score of 79-76.

“It is just a part of life. Basketball is a game of runs and they caught their run at the right time. The momentum shifted their way,” said Phillips.

“I was proud that we fought. We scratched until the end,” said coach Richie Alfred in an interview with the Star-Telegram.

The team’s statistics looked really good, reflecting all the effort they had put into the game. Jordan Phillips scored a total of 34 points, including two dunks- one of which was an alley-oop passed to him by number three Brandon Lawrence, a sophomore. Lawrence scored a solid 18 points himself. Phillips, Lawrence, and McCrary made the all-tournament team for their strong contributions.

The boys fought hard all season and throughout the playoffs.

“It was a good season. I had fun with all my underclassmen, teaching them and seeing how much they’ve grown. I truly believe that they’ll be right back here soon and I’ll be in the stands cheering them on,” said Phillips.

“We won our own tournament, the first tournament we have had here. We’ve been in other public school tournaments, beating big schools and we didn’t lose at home. Even though we didn’t get the state game, we had a good season,” said Alefnew.

With a record of 33 wins and 7 losses, Phillips and Alefnew are exactly right. It was more than a good season; it was a great season.

Definitely one for the books.