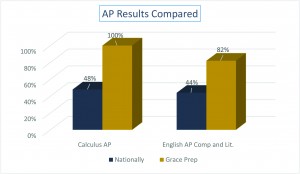 Teachers go above and beyond for their students every day, sacrificing their time to help us achieve excellence. This is true of our school, and as a result, something almost unheard of happened here last year.

This blows away all the averages, but for those of you who are number-crunchers, the Texas state passing rate for Calculus in 2013 was only 46%, and 48% nationally, according to the AP College Board published results.

Owens, who has been teaching math for 7 ½ years, earned a Bachelor’s degree in Science Mathematics at Howard Pane University, then went on to obtain a Masters and PHD from UTA.

For many people, math isn’t exactly their forte, but Owens became very talented at it at a young age.

“I took Geometry in Junior High and enjoyed helping other students. That’s when I decided I wanted to be a math teacher,” said Owens.

So how did Owens achieve such an incredible statistic as all of her students passing the difficult test?

“The students worked hard, and it helps that I worked with the man who designed the test,” explained Owens. “Because of that, I know what colleges want my students to know.”

To say we are lucky to have such a valuable teacher as Dr. Owens guide us through such difficult math is an understatement, but she isn’t the only teacher showing much larger than the state and national averages in AP passing scores.

Rachel Hogan, who has been teaching English for 20 years and 16 years of those at our school, recognized her career path in an interesting way.

“A cadaver made me do it,” laughs Hogan explaining how she became an English teacher. “I started out as a nursing major, but I realized I would not make a good nurse because they wanted me to use a cadaver on the first day of nursing school, so I switched my major right away.”

Just how successful has Hogan’s class been at passing the AP exams? Let’s say we are glad she switched her major as 82% in both Hogan’s AP Language and AP Literature classes passed their tests, earning them college credit at all Texas Public Universities, and most private Universities as well.

According to the College Board AP 2013 test results, the Texas average for passing the AP English tests was between 40 and 47%, and the national average was also lower than ours, at only 44% passing the AP literature and language tests.

What is the reason Hogan’s students have done so well?

“We do a lot of practice tests, the students have a strong background in English, and the pacing is strong,” said Hogan. “They are different from normal classes because we build skills all year long during class.”

Hogan thinks there is something special about teaching here at Grace Prep.

“I like that I can choose what literature we read, and that our students are engaged,” said Mrs. Hogan. “If you don’t pass the test, it’s alright. It’s just one test, one day, and you’ll get something out of the class no matter what, that you can carry into college.”

According to the AP Report to the Nation published February 2014 by the College Board, in 2013 in the U.S., only 9% of Texas high school graduates actually took the AP tests. According to Advisor Denise Webb, at GPA, however, 25-30% of our seniors take and pass an AP test. That is triple the Texas state average.

“I think our students do well on AP exams because our classes are smaller, and the teacher can focus on each student.,” said GPA College Advisor Denise Webb. “They really care about each and every student. Our AP teachers also attend the AP Summer institute where they are trained by professionals who have had a long history with the AP program.”

Mr. Tom Spring, who has been teaching AP classes for 21 years, (19 at Sunset High School in DISD and two and a half here at Grace Prep.) gave some insight on how our school compares to his old one.

“The AP scores are much higher here,” said Spring.

“Most students who attend a four-year public university or a private university have had an AP high school course,” said Spring. “AP courses allow students to learn from college texts, prepare for tests that are more challenging than the freshman college test, and potentially earn college credit. Students who take AP courses come out of them with higher grades in their college classes, they usually graduate sooner, and they are simply more prepared for the rigor of college courses.”

Are you convinced to take AP yet? If you aren’t, take this into account.

“The state of Texas passed a law that requires public universities to grant college credit to students who score a 3 or higher on AP exams, out of a scale of 1 to 5.” said Spring.

A 3 or higher is the general passing score accepted by most colleges and universities. This is an incredible opportunity for students brave enough to take on an AP course, and will take effect in May 2016.