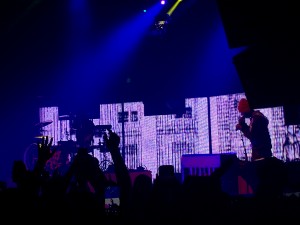 Chalk markings of “stay alive” and small skeleton logos covered the sidewalk that wrapped around South Side Ballroom on October 1st.

These were left by the dedicated fans of Ohio-based duo Twenty One Pilots. The band, consisting of drummer Josh Dun, and singer/rapper Tyler Joseph, is currently touring to support their fourth studio album, Blurryface, widely renowned for its blend of alternative rock, rap, electronic, and even reggae.

Before going into detail on Twenty One Pilots’ set, it’s worth noting that the two opening acts, Finish Ticket and Echosmith, were nothing noteworthy. Finish Ticket, a rock band from San Francisco, gave an exceptionally average performance, not sounding bad, but definitely nothing interesting. Echosmith, even though they are a more popular act due to their song “Cool Kids,” gave a similar performance, airing closer to mediocre and lacking an engaging stage presence.

Finally, after both acts were done, the huge LED backdrop started flashing in black and red patterns and the two figures of Tyler Joseph and Josh Dun of Twenty One Pilots appeared, dressed in ominous full body skeleton suits and ski masks.

The fast-paced beat of “Heavydirtysoul” filled the room as Joseph rapped into the hanging, illuminated microphone as the audience matched every single lyric, oftentimes louder than the band themselves. 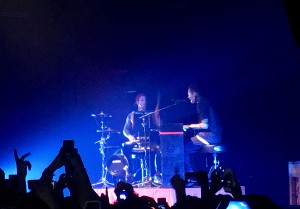 The duo continued with an even mix of songs from Blurryface as well as their previous album, Vessel, including “Stressed Out,” “Guns for Hands,” and a ukulele segment that seamlessly transitioned from “House of Gold” into “We Don’t Believe What’s On TV.” Midway through “Lane Boy,” a critique of the current state of the music industry and pop music (“Don’t trust a perfect person / And don’t trust a song that’s flawless”), two random men dressed in hazmat suits joined the band on stage as Joseph told the audience to “get low,” leading into an explosion of smoke, color, and sound as the crowd simultaneously jumped into the air and Dun pounded rapidly on his drum set.

For the next few minutes, the piano and drum set were brought close together at the front to resemble a smaller stage setup, as they played a medley of songs from the first two albums, including “Ode to Sleep,” “Semi-Automatic,” and the bridge of “Screen,” which had the entire audience composed of everyone from young teen-aged girls to wild college students to adult men singing “we’re broken people” in unison.

It’s moments like this where Twenty One Pilots’ subtle Christian influences show through their music, encouraging their listeners to think about the meaning behind the lyrics and come to conclusions themselves, rather than throwing it in their faces. 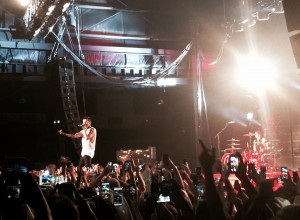 The band finished out the main set with more fan-favorites. Joseph stood on the front railing of the audience during “Holding On to You,” while literally holding onto the hands of numerous fans. Similarly, during the second half of “Ride,” an extra drum set on a platform was given to the front of the crowd as Dun performed a drum solo on top of them.

The show continued with more similar crowd interaction, as they pulled a fan onstage to do a handshake (featured in the music video for “Stressed Out”) with Dun. At the end of the main set, Joseph appeared in the back of the venue during “Car Radio” and climbed a roughly 30-foot scaffolding with hardly any room to stand.

For the encore, they played the slow-burning “Goner,” one of their only songs that could be accurately described as going “0 to 100 real quick.” This transitioned into their long-time show closer, “Trees,” ending with Joseph and Dun climbing onto platforms on top of the audience, and pounding on two separate drums as red confetti rained over the audience.

At this point, Twenty One Pilots had already played over 60 shows since May, and yet they continue to give 100% at every show, never appearing tired of playing or like any show is “just another show.” No other band I’ve seen has shown the amount of genuine gratitude towards their fans through both their performance and their words. They also show no signs of slowing down any time soon, and should be on the top of anyone’s list on their inevitable return to Dallas.

By Macie Morrison 9 months ago

By Stephanie Hall 10 months ago

By Shea Pulaski 1 year ago